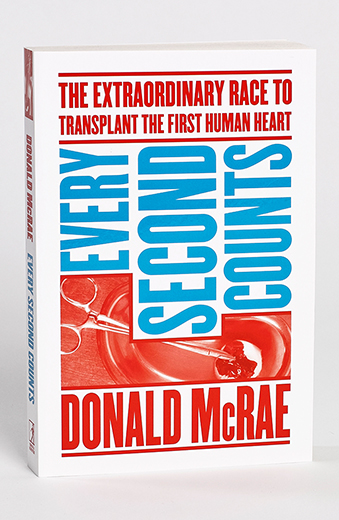 On 2 September 2001, Christiaan Barnard died a lonely death in Cyprus. The reputation of the South African cardiac surgeon, who gained meteoric fame around the world when he transplanted the first human heart in 1967, had long since succumbed to controversy. The 78-year-old surgeon struggled for his last painful breath in Paphos, close to the mythical birthplace of Aphrodite, the Greek goddess of love and beauty. But a few days before the world changed forever, with the devastating attacks on 9/11, it was still possible to be struck by the pathos in one of Barnard's final laments. Reflecting on the skin cancer which had begun to eat away his face, he said, "I now look more like the elephant man than the handsome guy once voted one of the world's five greatest lovers by Paris Match."

It all seemed so different from the blue-skied day I dimly remembered from our holiday in Cape Town in December 1967. I was six-and-a-half and it seemed as if Chris Barnard had just made Cape Town the heart of the universe. The eyes of the world were on us. Rather than glaring down with their usual contempt they had opened with wonder at the sight of Louis Washkansky – Barnard's suddenly famous patient at Groote Schuur Hospital. The surgeon had just removed Washkansky's dying heart and replaced it with the heart belonging to a young woman, Denise Darvell, who was brain-dead after an accident. The world could hardly believe the audacity and brilliance of Dr Barnard's "medical miracle".

Chris Barnard really was, as one of his nurses claimed, "one hell of a guy". He flew to Europe and America and, thrilled by his hot flush of fame and the reaction to his good looks, he was seen with Grace Kelly, Sophia Loren and Gina Lollobrigida – with whom he had a well-publicised affair.

His death, however, made me think again and I began to explain Barnard's significance to my wife. She knew that, in 1967, television had been banned in South Africa because the government believed that it could be used as "a tool of communist propaganda" against apartheid. Park benches were demarcated for 'Whites Only' – while trains and buses and schools and beaches and almost everything else carried the same colour-bar stipulation. Yet, incredibly, South Africa had just made surgical history.

Alison asked me lots of questions for which I had few answers. Had Barnard planned the first transplant for years? Did he work in isolation? Were any other surgeons striving to transplant a heart?

It took me a long time but, eventually, after some illuminating trips to America to meet great old cardiac surgeons, I had the basis of an incredible story that had never been documented before. Barnard was much more layered than media depictions had suggested. His compassion as a doctor, especially post-operatively, matched his daring ambition. Yet three American doctors had been years ahead of him in the "race" to transplant the first human heart. Their laborious research paved the way for history to be made.

Early in December 1967, Norman Shumway at Stanford, Richard Lower in Richmond, Adrian Kantrowitz in New York and Chris Barnard in Cape Town were all on the brink of "surgical immortality." A matter of days and even hours would separate them in the end. Barnard, the boldest and least prepared, "won" the race after a series of dramatic moments cleared his path.

The world celebrated his success without knowing much of the men whose groundbreaking preparations had made the operation possible.

Adrian Kantrowitz, Richard Lower and Norman Shumway might have each regretted not being "the first", but they were warm and welcoming as I regularly visited them. They all lived long enough to read Every Second Counts. They might not always have agreed with each other but the endorsement each surgeon gave this book meant more to me than any award or appreciative review.

I ended up writing obituaries of Shumway, Lower and Kantrowitz but, rather than feeling sad or deflated, I remembered their passion, alongside the South African nemesis they eventually outstripped with their enduring contributions to medical science. Shumway, Lower, Kantrowitz and Barnard were either close friends or bitter rivals, university classmates or surgical adversaries. But, most of all, they were pioneers of human heart transplantation who have benefitted hundreds of thousands of patients over the years.

They would have been amused by the fact that I ended up addressing a convention centre of esteemed surgeons from around the world at the International Society of Heart & Lung Transplantation's annual conference in San Francisco in 2007. It was nerve-shredding – until I realized that the massed ranks of surgeons staring up at me were just as interested as I was in the riveting origins of cardiac transplantation.