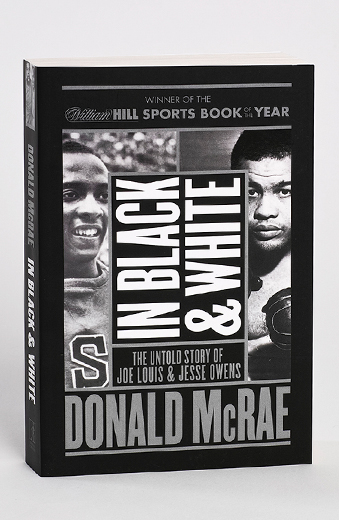 When I was young it seemed to me as if the novel represented the zenith of writing. Of course, years later, I continued to read fiction. I still loved Roth, Coetzee, DeLillo, Ford, Carver, Amis, Kelman and many others. But I'd always been engaged by non-fiction and Truman Capote's In Cold Blood, Norman Mailer's The Fight, Rian Malan's My Traitor's Heart and David Remnick's King of the World meant as much to me as any of my favourite novels.

Yet, after writing two consecutive sports books in Dark Trade and Winter Colours, I resolved to do something different. For a few mad months I tried to plan a novel. It was not a great idea and I woke up one Friday morning and decided I had better get cracking and start writing again rather than wittering on about some vague change of direction.

I still groaned when it was suggested I write a book about Jesse Owens. It seemed a painfully obvious subject because we all knew the story of Owens at the 1936 Olympic Games when, in front of Hitler and the rest of the Nazi leadership, he won four gold medals.

He was a great black athlete but I could not really see the point of writing another random account of an event that had happened decades ago, long before I was born, and especially as Owens had been dead for years. But we had a small daughter and another baby was on the way. I didn't have a job and my wife had given up architecture to become a full-time mother. We felt very poor.

On the train to Colindale and the British Newspaper Archive I swore to myself that I would not write a book for money. I would have to find a subject that really meant something to me. But devoid of any real ideas, as I'd only abandoned the terrible novel eight hours earlier, I would submit to a few days of research on Owens. At least it would get me away from a terrifyingly blank computer screen.

I was confused by the arcane methods of the Newspaper Archive. For the first few hours in Colindale, I stumbled around as I tried to feed the bulky reels of ancient newspaper pages, captured for posterity on microfiche, into hulking machines. Eventually I got the hang of it. Another hour drifted past and I became more interested. I liked reading stories from the New York Times and the Chicago Defender in 1936. Even the newspaper adverts from those long-gone days intrigued me. The material about Owens in Berlin was also better than I expected but, still, I was sure that this would be just a day of diversion before, over the next weeks, I discovered a proper idea.

After lunch, I went over to the desk where you submitted your order for the next four reels. I began to write down my requests when, on a whim, I decided to jump a couple of years to 1938. Two years after his Olympic glory I hoped I might find more reflective pieces on Owens' achievement. I might even learn what had happened to him because it seemed to me as if his life was frozen in Berlin. What did Jesse Owens do after the Nazi Olympics? I imagined that he must have broken many more world records and been feted across America. It sounded like a sweet story – but nothing more.

A grainy newspaper cutting changed everything. My eyes had just begun to glaze, as one page after another from the Chicago Defender whirred past on the microfiche screen, when a brief news item snagged my attention. The bare details were enough to floor me. On 4 July 1938, only two weeks after gaining revenge in the ring against Germany's Max Schmeling, Joe Louis had raced against Jesse Owens in a 60-yard dash. An image of the poker-faced and flat-footed world heavyweight champion running against the smiling and flying 'Fastest Man on Earth' bewildered me. Why were they racing each other in such an unequal contest? What had driven them to such a stunt – so soon after they both conquered the ring and the track against Hitler's favourite sporting representatives?

I remembered the famous photograph of Owens breasting a ribbon of tape as he won the Olympic 200m final, and his third gold medal, in Berlin. His nearest grimacing rival, five metres adrift, looked trapped in agony. Owens offered a contrasting study of grace and beauty.

I had also seen Louis' one-round demolition of Schmeling again and again. It always worked as a reminder that boxing had once mattered to millions of people.

That small and stark report, uniting Jesse and Joe, two great icons of sport in an absurd race, would prove to be the spark for my fourth book – In Black & White: The Untold Story of Joe Louis and Jesse Owens.

Six months later, in the summer of 2000, having researched the basic outline of their lives, I travelled to Chicago to start real work on this book. I met first with Ruth Owens, Jesse's eighty-five-year-old wife, as she shared her memories of her husband and his great friend. Joe Louis and Jesse and Ruth Owens had lived in strange and bleak times. America had been divided into two separate and unequal worlds. 'Negroes' were barred from white schools, hotels, restaurants, parks and beaches. They sat in the 'colored' carriages of trains and the back seats of buses.

It was the same in sport. No black man had been allowed to play Major League baseball. Years would pass before their disciple and friend, Jackie Robinson, made his momentous debut for the Brooklyn Dodgers in 1947. Other professional sports remained resolutely white. The ban against black men in American Football would stretch to 1946; and in basketball to 1950.

Ruth said that it prefigured apartheid, which I had lived through in South Africa in the 1960s and 70s, but that Jesse and Joe had changed everything in America. In 1935 they had become the first black stars in American sport, busting open the country in a way not even performers like Paul Robeson and Bill 'Bojangles' Robinson, or Louis Armstrong and Duke Ellington, could rival. Jesse and Joe, Ruth explained, tried not to think too much about their terrible burden of their breakthrough. Sometimes it felt as if they carried the weight of an entire race of people on their shoulders.

Yet now, in a different century, they were in danger of being forgotten.

"I think you should write about Jesse and Joe," Ruth Owens said to me with a small smile. "They were amazing men..."

Ruth died before publication but I thought of her a lot, and of Jesse Owens and Joe Louis, on the day that In Black & White won the William Hill Sports Book of the Year in 2002.