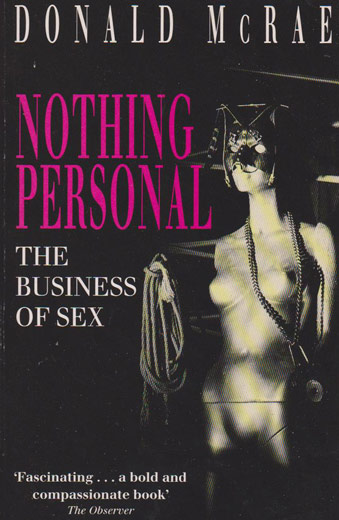 Mandy and Simone tear up my stereotypical preconceptions of prostitution – but they are also framed by sadness as they punish clients like the powerful and unhinged banker who, in this book, calls himself Alistair. Slowly and inexorably, he emerges as a dangerous enemy. Fearing publication of this book, Alistair unleashes a sustained campaign of violence. I'm attacked on numerous occasions by two skinheads he hires – but being young, single and half-crazy, I keep writing.

It's hard to stop when I'm describing people as different as Sara Dale, the tabloid-tagged Miss Whiplash and a South African-born sex therapist who works in a flat belonging to Norman Lamont, the Chancellor of the Exchequer, and Jackie who is more prosaic in presenting herself as "a £15 Chinatown whore." I also owe it to Tim, who styles himself as a slinky Madonna-impersonating transvestite, and to Leila, who works the night-time streets in Notting Hill, to keep writing this book.

There are many nights when I want to stop because most of the stories are so dark and desolate at their core. And yet, at the same time, the people I meet reveal more about this damaged industry than any well-meaning homilies about the need for respect and salvation.

"A fascinating, bold and compassionate book." (The Observer)

"In Donald McRae's informing, alarming and sad book about the sex industry in England, his humanity persists in his humour." (The Financial Times)

"Compelling and informative…" (Scotland On Sunday)

"A must for anyone fascinated by life's seamier side..." (Today)