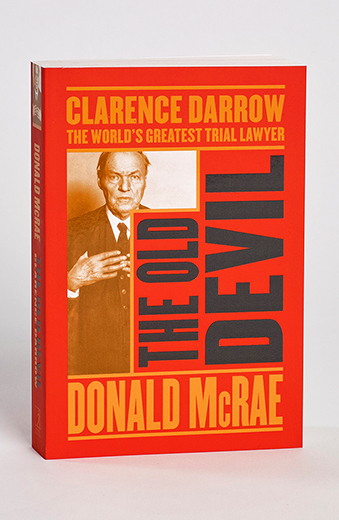 Clarence Darrow returned to life in a small and cramped theatre in Doornfontein, a dangerous part of Johannesburg, as sweat flew from his face. Early in 1984, forty-six years after his death, Darrow held me in a grip so tight that, for a while, it felt as if I couldn't breathe. I was twenty-two years old, a white South African dodging military service in a war along the border, while working as a school teacher in the black township of Soweto. I was struggling to keep my head straight in a country dominated by apartheid and murder, by theories of biblical retribution and pure white neighbourhoods, by the same prejudice which Darrow had raged against during his three defining trials as an iconic lawyer sixty years earlier.

That one-man play, Clarence Darrow, had been made famous by Henry Fonda, who had acted out the courtroom life of the great attorney in the mid-1970s. Under apartheid, and locked inside a cultural boycott, there were no famous stars to light up the Johannesburg stage. But this was also a period of fevered vitality and cultural resistance and Richard Haines, who played Darrow, was perhaps the best actor in South Africa then. He was gay rather than straight, and not an old man like Darrow, but he seemed to give flesh to the twentieth century's most celebrated yet controversial lawyer.

It helped that Darrow's work resonated so forcefully in South Africa – for we lived in a country that echoed 1920s America. The racial divide echoed the divisions that had cleaved America apart during Darrow's time. I was also familiar with Darrow's motivation in standing up to religious fundamentalism. We lived in a country where the government tried to justify apartheid in biblical terms with talk of "God's will" and the holy vow that had apparently been struck between the Afrikaner people and the Almighty. Our old religious province of the Transvaal seemed curiously related to Tennessee and the Bible Belt – where, in the Scopes 'Monkey' trial, Darrow had waged battle against those who regarded the teaching of evolutionary theory as a mortal sin.

Darrow was famous for his defence of the America's most notorious "thrill-killers", Nathan Leopold and Richard Loeb, and we even had our own comparative pair. I came from the same town, Germiston, as Charmaine Phillips who, the previous year, in October 1983, had gone on the run with her older lover, Peter Grundlingh, as they murdered four men on the road. Grundlingh, who had confessed to the murders, was on death row the night I saw Clarence Darrow.

Twenty-two years later I felt the same shiver of recognition as I uncovered new material around Darrow's defining trilogy of trials – when he defended Leopold and Loeb in Chicago in 1924, John Scopes in Tennessee in 1925, and Ossian Sweet in 1925 and 1926. Sweet had been a black physician charged with murder after he had fired shots in self-defence when a lynch-mob surrounded his new home. He and his family had just moved into a white neighbourhood of Detroit.

No other book had focused exclusively on these three trials, which Darrow contested between the ages of sixty-seven and sixty-nine, or explored his illicit relationship with the journalist Mary Field Parton – which he rekindled just before he went into battle for the lives of Leopold and Loeb.

I knew then that my sixth book, The Old Devil, was underway…