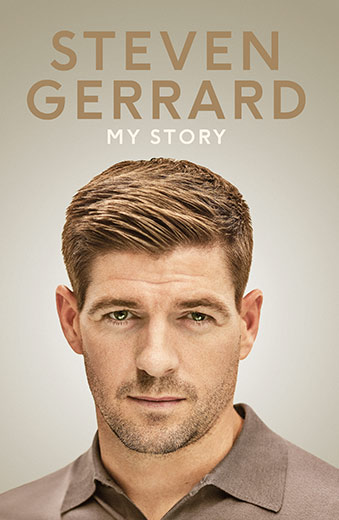 The book opens on Sunday 27 April 2014 and, as Steven Gerrard remembers, “I sat in the back of the car and felt the tears rolling down my face. I hadn’t cried for years but, on the way home, I couldn’t stop. The tears kept coming on a sunlit evening in Liverpool. It was very quiet as we moved further and further away from Anfield. I can’t remember now how long that journey lasted. I can’t even tell you if the streets were thick with traffic or as empty as I was on the inside. It was killing me.”.

We’re back with Gerrard on that terrible afternoon for him when his infamous slip against Chelsea felt so costly. He wants to win the league so badly because twenty-four years have passed since Liverpool last lifted the title. “I was dreaming of today even then,” he says, because Gerrard had been ten-years-old in 1990, when the team of his dreams became champions. They were managed by Kenny Dalglish, captained by Alan Hansen, and featured players he revered like McMahon and Molby, Beardsley and Rush, Whelan and Barnes.

Gerrard was already playing for Liverpool, as part of their academy, having been invited to join the club’s Centre of Excellence at the age of eight. He made his first team debut at eighteen and, as he says, “I had no idea how it might feel to be a thirty-three-year-old man crying in the back of a car.”

He goes deeper. “I felt numb, like I had lost someone in my family. It was as if my whole quarter of a century at this football club poured out of me. I did not even try to stem the silent tears as the events of the afternoon played over and over again in my head.

“In the last minute of the first half against a cagey Chelsea, set up to stop our rush to glory by José Mourinho, it happened. A simple pass rolled towards me near the halfway line. It was a nothing moment, a lull in our surge to the title. I moved to meet the ball. It slid under my foot.

“The twist came then. I slipped. I fell to the ground. The ball was swept away and the devastating Chelsea attack began. I clambered to my feet and ran with all my heart. I chased Demba Ba as though my life depended on it. I knew the outcome if I couldn’t catch him. But it was hopeless. I couldn’t stop him. Ba scored. It was over.”

In the car, his wife Alex and one of his best friends, Paul McGratten, try to console him. They try to give him hope that, maybe, Liverpool will still win the league. But Gerrard knows that his hopes have been extinguished.

“There would be no comeback for Liverpool. There would be no Miracle of Istanbul – a repeat of that Champions League final when, in 2005, we were 3–0 down at half-time against AC Milan, the Italian masters of defence, and yet we fought back and won the game on penalties. I had been at the heart of that team. I was already Liverpool captain all those years ago. I scored the first goal in our long climb back against Milan. I kissed and held the Champions League trophy, and kissed it again, before anyone else on that magical night in Istanbul.

“I had lived through many great moments in my career and achieved success beyond my most fevered boyhood dreams. I had played and scored in games and tournaments which belonged to another world from the Bluebell Estate in Huyton, Liverpool 36, where I had grown up. I had done things that would have shocked me as a kid.

“I had also given absolutely everything of myself to Liverpool FC: in training, in almost 700 games, off the pitch, around the squad and as part of the club, the community and the city. I could not have done any more. I had squeezed out every last ounce of ambition and desire and hope inside me. In the end, it had not been quite enough to help us win the title everyone at Liverpool craved.”

Gerrard describes his loneliness and desolation. “The Kop, and the whole of Anfield, had sung ‘You’ll Never Walk Alone’ but, in the car, I felt isolated. I felt very alone. The Liverpool anthem reminds you to hold your head up high when you walk through a storm. It reminds you not to be afraid of the dark. It reminds you to walk on through the wind and the rain, though your dreams be tossed and blown, and to walk on with hope in your heart.

“I did not feel like I had much hope left. It seemed like I was heading for suicide watch instead.”

There was so much raw honesty in his account that it was important to immerse the book in the immediacy of Gerrard’s voice. He was at his most compelling reliving the tumultuous recent memories of the 2013-14 season when Liverpool played exhilarating football and came so agonizingly near to the league title.

During that very first interview he also described, in intricate detail, how that campaign had begun with the stress and worry of a dramatic stand-off between Luis Suárez on one side and the Liverpool board and Brendan Rodgers opposite him. It became apparent that Gerrard was a key figure in persuading Suárez to stay for another year – and inspire Liverpool to their audacious title charge.

There was so much colour and detail in Gerrard’s descriptions I felt it was essential to focus the first half of the book on that tumultuous season – while also allowing him the space within those pages to reflect on his youth and earliest years at the club. The second half of the book hangs on the hook of his final World Cup, in Brazil, and his very last season as a Liverpool player. It was a more downbeat, but intriguingly reflective last year for Gerrard at Anfield. 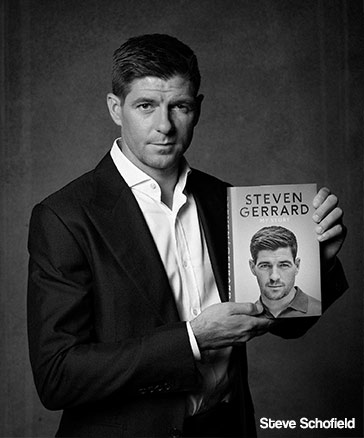 We were both intent on trying to avoid rehashing too much old material, which had been covered in his first book. Instead it felt imperative to try and give the narrative real pace, and pathos, by delving deeply into his last two years in the red of Liverpool. But as we raced towards the end, and with emotion swirling around every game, and interview, we were also glad to revisit the greatest games of his career – from his late wonder-goal against Olympiakos in 2004, to the incredible 2005 Champions League final victory, to his greatest-ever performance while helping Liverpool beat West Ham in the 2006 final.

The book echoes with memories of some of his greatest allies, managers and rivals – from Alonso, Benítez, Carragher, Dalglish, Hodgson and Houllier to Maldini, Mourinho, Pirlo, Rooney, Suárez and Torres. There were even walk-on parts for a couple of villains – and I will always think of Stevie G whenever I see Stuart Pearce and Martin Atkinson on television again.

It was hard for Steven to relive the harrowing memories of Hillsborough. Yet, having lost his ten-year-old cousin, Jon-Paul Gilhooley, the youngest of the 96 Liverpool fans who died at Hillsborough, he also knew that we needed to remember what had happened and to pay tribute to the courage and commitment of all the families who have campaigned for twenty-six years against cover-ups and distortions. The truth has, at last, begun to emerge.

This is also a book about fame and money, those twin forces which have changed football so much, and how Gerrard has tried to stay true to deeper values. He discusses some difficult and even embarrassing moments – from the Chelsea transfer speculation, to being arrested in Southport and suffering a gashed penis which needed stitching straight after an unromantic FA Cup tie against Bournemouth. Gerrard also gives some insight into what it feels like to be lauded and abused, hounded and scrutinised, with both Liverpool and England – and the cost to him as just an ordinary person, a husband and a dad.

Yet the sheer love he shows for playing football, whether it’s outside number 10 Ironside Road in Huyton as a kid or in a decisive Champions League or World Cup match, resonates most deeply. Football defines him. In the end, Steven Gerrard can decide that, “At the age of thirty-five, life was deeper. It was better. I could start again, but I would carry the past, and all I had done, the elation and the pain, wherever I went. It seemed clearer than ever to me. The dark and the light, the joy and the hurt, the hope and the loss, cannot be parted. They belong together…”

A SUNDAY TIMES BEST-SELLER WITH OVER 110,000 COPIES SOLD IN HARDBACK IN THE FIRST 10 WEEKS OF PUBLICATION

“It is rare that a book benefits from being written in haste. Yet My Story by Steven Gerrard, is one such example where, thanks to the skill of Gerrard’s co-writer, Donald McRae, the ideas and memories tumble off the page with a freshness and immediacy that is rare in the sometimes airless world of the sporting autobiography.

Rather than taking a tedious narrative approach, the book largely picks up where Gerrard’s previous, more conventional, book left off. Contemplating life after Liverpool and England, regrets and relief pour fourth. Ultimately it is not so much the descriptions of the big moments that stay with you as the vignettes that reveal wider truths: Gerrard sitting on the sofa with a bag of Haribo sweets as he tries to recover from the trauma of The Slip, texting his physio late at night as he is wracked with pain and dark thoughts or the bittersweet abandon of dancing with his team-mates in Dubai after his final game. Highly recommended, even for non-Liverpool fans.” [Owen Gibson, The Observer’s Sports Books of the Year]

“Steven Gerrard: My Story, written with Donald McRae, is required reading – an unflinchingly honest look at a career that won Gerrard the admiration and respect of just about everyone in the game.” [Chris Maume, Independent’s Sports Books of the Year]

“The biggest hitter is My Story by Steven Gerrard and Donald McRae. McRae had 100 days from his first meeting with Gerrard to write the book but you wouldn’t know it by the result. He has captured the former Liverpool captain in all his morose glory.” [Irish Times Sports Books of the Year]

“This book is a minor miracle…you've got to admire Gerrard's honesty….McRae has done a great job, committing himself to writing 3,000 words a day in the 50 days he set aside for writing down and making a whole out of Gerrard's recollections while the great man played out his last few months for Liverpool.” [lfchistory.net]